After a certain time, I discovered that there is a great difference between cleaning and caring. 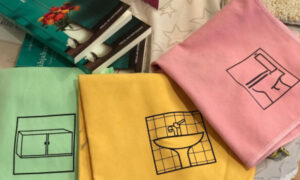 When we clean, we remove dirt, and the result of cleaning sometimes does not even last five minutes. You have barely cleaned the hallway, and already someone walks over it leaving foot marks everywhere. As soon as the kitchen floor shines, a small child comes in to proudly present us with a precious treasure found in the sandpit. For this very reason, many people consider cleaning a frustrating and unrewarding activity, a troublesome necessity.

Yet, if we try to do this task with our full awareness and devotion, and consciously try to penetrate each little corner with our fingertips then cleaning takes on a nurturing aspect and becomes caring. While caring for a room, we don’t only come into contact with the physical world. The whole atmosphere changes, as if the room is filled with light. Children especially react strongly to this transformation and they also seem to perceive the change directly. We once gave a big house a very thorough spring clean. Returning from school, the ten- year-old boy immediately wanted to know whether the walls had been painted, as the house seemed so bright and shiny.

When we have taken special care of a room, the little bit of fresh dirt which is brought in, is barely disturbing; one can easily live with it. The aura is totally different from areas where layers of dirt and grime have built up. The wonderful thing about caring for a space is that the result of caring lasts considerably longer than “just” removing dirt!

When we care for a space, we do not simply remove dirt, we also create space for something new. What becomes “new”? Who is going to fill this space? This is quite an important question. I tried to be very open-minded as far as this was concerned. The answer to these questions came a few years later. But as soon as I had learned to do my work with love and surrender, I also learned to enter a space in a non-judgmental way. Every room I entered became my task and the worse a room looked, the more interesting this task became. I never experienced disgust, not even for the worst possible toilets. I never thought: “Goodness, what a bunch of pigs!” I simply accepted that this was now the task at hand.

In 1992 I was asked if I would take over the responsibility of cleaning the Goetheanum in Dornach, near Basel. The Goetheanum[1] is a cultural centre and seat of the international anthroposophical movement and the home of the School of Spiritual Science and the General Anthroposophical Society. To me, this was not only a great honour; it was the culmination of my task.

My company had already taken over the cleaning of all the sanitary areas in the Goetheanum since 1989, and I chose to step in for my colleague when she was either ill or on holiday.

There were a total of sixty four toilet bowls and it is here that I had learned to always kneel down in front of a toilet in order to clean it. Bending down, straightening up, and moving backwards in a semi circle made me feel quite dizzy. I was not trained then as I am today and I very soon noticed how very strenuous all this bending down was for my back. So I knelt down in front of the toilet to clean it properly and to make sure I could reach every part of it: The very bottom of the bowl, under the edges, the hinges on, right to where it was attached to the floor or the wall. This position made a whole world of difference. I perceived the toilet in a totally different way, not only as far as the senses are concerned. I had to adapt my gestures and even touch it in a different way. Once the job was finished I tried to consciously stand upright. All this was a new experience. I developed a strong awareness of my own uprightness and at the same time I could sense how the atmosphere in the room changed. I repeated this exercise often to make sure I was not imagining things. Yet every time on being upright I experienced this change which took place in the space.

I shared this experience with a friend who had studied to become a social therapist and had the great privilege of learning from Karl König in a Camphill[2]  community. She was able to explain to me that from an esoteric point of view, every act that is consciously done leaves an effect on the atmosphere, even to an extent where people can feel it and be influenced by it. I believe that this effect can be compared to therapeutic work. A patient who is too weak to move can experience the effect of certain exercises just by observing the therapist executing them.

About five years after I have started my company, while covering for my colleague at the Goetheanum, I had an experience which was to have a strong influence on my life. In a dream, Aïvanhov, the Bulgarian philosopher and mystic, came to me and said: “The time has come to understand the importance of the work you do.” He took me with him, opened a heavy wooden door and showed me a room which I had never seen before. It had a very high ceiling, heavy furniture and impressive paintings on coloured walls. We stood on the threshold and his gaze moved over the entire room. His seemed to greet the room and then started dusting an area with harmonious, flowing, yet very precise gestures. Objects were very lovingly picked up and wiped clean with a soft cloth. “When you clean,” he said, “you do not merely remove dirt; you not only “recreate” the objects you touch, you also consciously create space for something new. There are invisible beings that are connected to every room, every object, every human being and even the activities which are to take place in this space. There are helping beings and there are hindering beings. Removing dust and dirt results in a void and you cannot know what this void, this newly created space needs. But you can put it at the disposal of the helping spiritual beings that are linked to the place you are cleaning. They know exactly what the people, the space or the activities need, that something new and positive may come about. Do not merely offer the space to the invisible beings but take care to offer it only to those beings that are beneficial to the circumstances.”

Before leaving the room, he paused again for a short moment on the threshold, to make sure that all was well and in its proper position, just as we have found it.

The following morning, while I was still cleaning the toilets, the person who was responsible for the cleaning of the Goetheanum at the time, came to me and asked me whether I could take on another task once the toilets were done, as quite a few of the students in the cleaning team were absent. Imagine my surprise when he showed me the room to be cleaned – it was the very same room in which I had received my lesson on caring and creating space the night before.

Since then I never enter a room with the intention of changing anything. This conscious way of taking care of the spaces in which people, work, learn, sleep requires attention and sensitivity. There is no sense in trying to force my own ideas onto a space. Through active surrender, I learned that it is possible to transform what is found. Rather than trying to change something, I try to be reserved on, because I do not know what the space requires. Does a classroom need something harmonious, soft and tender or does it actually need a “firm” hand, structure? I trust that the supportive beings linked to the room or activity will know what the needs are. It is therefore sufficient to put the space I created at the disposal of these helpful beings. Thus I have learned to work with the attitude of: “Thy Will be done.”

CAMPHILL COMMUNITIES provide opportunities for children, young people and adults with learning disabilities, mental health problems and other special needs to live, learn and work together with others in an atmosphere of mutual respect and equality.
There are more than 100 Camphill communities in over 20 countries in Europe, North America, southern Africa and India where those with special needs are offered the support they need to develop their potential.
Camphill community life is based on Christian ideals and the teaching of the philosopher Rudolf Steiner (1861-1925)